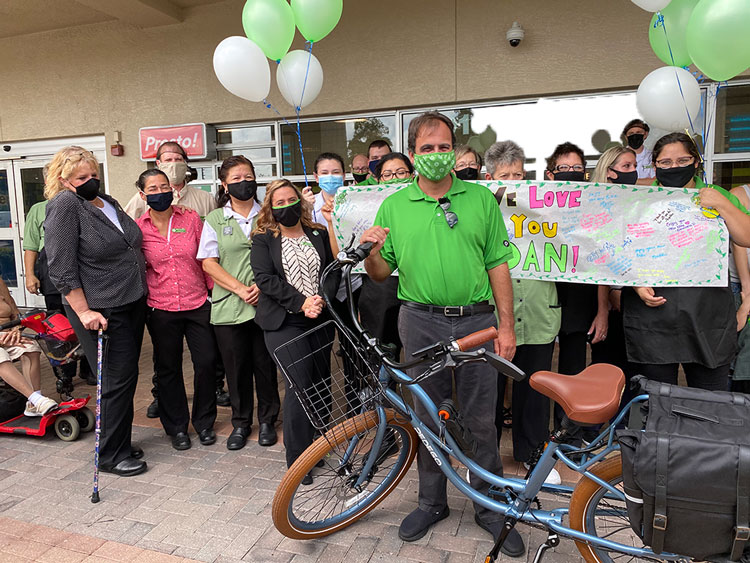 Turning an unfortunate situation into an act of kindness, a community in Southwest Florida rallies together to support one of their own. Pedego Electric Bikes worked in collaboration with the Bonita Springs community to help replace a stolen electric bike for one of their beloved residents.

Last week Lisa and Skip Badolato, owners of Pedego Fort Myers, heard about the story of Daniel Smith, a dedicated employee of Publix supermarket for nearly 20 years. Daniel’s bike was taken during one of his shifts at the local grocery store, and as someone who uses it as his main form of transportation to and from work, it proved to be a devastating loss. Although it may just seem like just a bike to some people, for Daniel it was much more. Daniel is developmentally challenged and his electric bike provided a great sense of freedom and independence for him. “When I first got it, it was kind of like having a car– it has a key for it and everything. It kind of made me feel like I had a car– I was kind of protective of it,” says Daniel in an interview with the local NBC 2 News in Bonita Springs.

Once Daniel’s community of Bonita Springs caught wind of what had happened to Daniel, it did not sit well with them. As a result, community members decided to rally together and show their support by raising a total of $1200 to go towards a new bike. The Badolato’s then joined in and worked closely with Pedego headquarters to make up the difference and ensure that Daniel was outfitted with a whole new set up. Lisa and Skip presented Daniel with his new bike, a Pedego Interceptor, at his work last week. “We were glad that he wasn’t without it for too long,” Lisa said in an interview with WINK News, “And we were able to act quickly. He had the bike very quickly, and now he has a better bike– We’re really excited for him.” The Badolato’s made sure Daniel’s new bike was outfitted with Pedego accessories, 2 locks for extra protection, and a 5-year anti-theft protection warranty to ensure history does not repeat itself.

Daniel was extremely grateful for the outpouring of support, “It’s good to know that there are a lot of people that cared… and that cared enough to help me in my time of need,” Smith said. Daniel’s mom, Libby Smith, was overwhelmed with the act of kindness stating, “This is the best thing that’s ever happened in my life.” Daniel thanks both Pedego and his Bonita Springs community, “Thank you for your love and support, it means a lot to me.”

Pedego was more than happy to be able to help Daniel in his time of need and is looking forward to hearing about how much he loves riding his new Interceptor. If you are interested in trying out a Pedego bike for yourself in southwest Florida or want to learn more about Pedego’s full-range lineup of e-bikes, rentals, services, and accessories be sure to visit Lisa and Skip at Pedego Fort Myers.