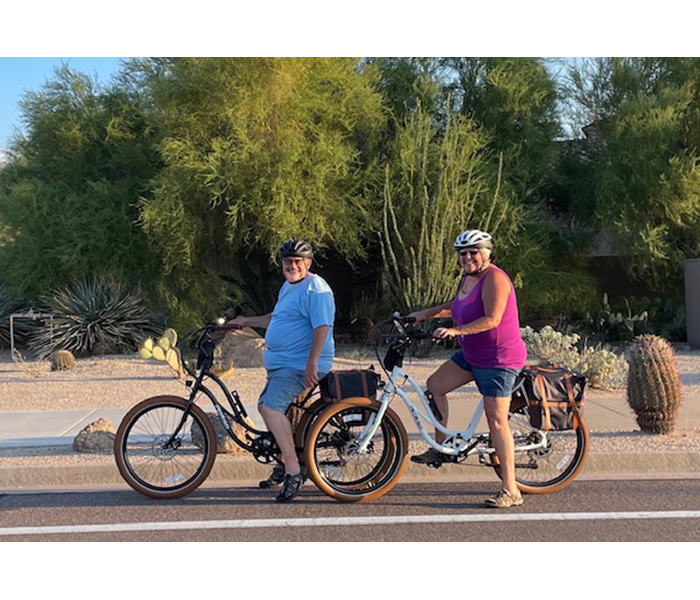 After almost 20 years away from recreational bike riding and a sedimentary lifestyle, my wife Stacie convinced me that we needed to be exercising more now that we are in our 60’s. I was getting a similar message from my Doctor.  My sister-in-law had purchased a Pedego so of course we were interested in finding out more, although being the frugal spender I am thought “that’s a big investment” especially for two bikes, can Pedego really be that great?  Well, the answer is an astounding YES! At first, I was very hesitant but eventually we decided to spend a weekend test driving a few brands that we would be able to ride before purchasing. Honestly, I was not optimistic or excited about this.

So, in July 2021 off we went on our adventure to look at E-bikes.  Our first stop was a local bike shop down the street which we quickly realized did not carry any E-bikes so we then moved on. The next stop was a nice shop that carried multiple brands. We asked, “what about the ones we see on the internet” and got a really nice explanation that “we’ll do our best to repair them, most shops don’t carry the parts for those brands in stock so sometimes it can take a long time for the repair to be completed” (this was a consistent message at most shops we visited).  They did let us test drive a bike around the parking lot for a couple minutes and since I had never been on an E-bike my interest was increasing a bit. We then moved onto the next shop and although they sold E-bikes they could not offer a test drive.

Our final stop of the weekend was at Pedego Gilbert AZ where we were greeted by Mike (the owner) and Tom (the store manager) as if we had been long time customers.  It was quite a refreshing experience. Mike and Tom were low key, no pressure and answered all our questions as silly as they might have been.  We learned all about Pedego, Peddle Assist, Throttle and after looking at a few models we thought that the Interceptor model would be good for us.  Tom said, “hey, let’s go for a ride which ones do you like”?  I think Tom knew riding the bike would sell itself. We picked out two bikes and Mike and Tom got them ready for our test drive. Tom guided us to a large parking lot next door to the shop so we could get acquainted with the bikes, seat height, peddle assist and the throttle.  Then off we went to the Gilbert bike path for our test ride. We rode for a about ½ hour and really fell in love with the Pedego bikes but more importantly we were so impressed with how we were being treated by Mike and Tom who explained the 5-year warranty, theft replacement guarantee and how no matter where in the US we might be, all the Pedego dealers would treat us like family even though each store is locally owned. These guys were great as is the Pedego customer service and we were ready to buy.

I asked Mike “when could we have the bikes delivered if we purchased them today” to which he responded, “how about 3pm this afternoon?” I WAS ECSTATIC and said “PERFECT, let’s do it”.  Although Pedego was not the least expensive brand, we were so impressed by how we were treated we could not see us purchasing any other brand of E-bike. PEDEGO was the brand for us. So now with both of us in our 60’s, we’ve already put 300 miles on our Pedego and average 15 mile rides. As a side note, although we’ve lived here is AZ for 4 years, we are seeing our environment in a whole different way and now have a bike rack for our car and planned some trips around bike paths.