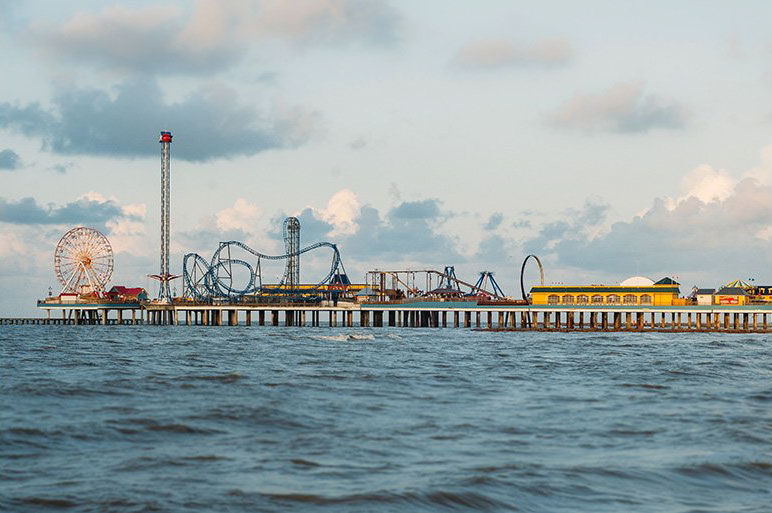 Galveston is a hidden gem off the Gulf Coast of Texas. Between its gorgeous Gulf Coast views and unique charm, Galveston is the perfect place to explore from the seat of an electric bike — better yet, a Pedego! Whether you are a traveling tourist or an everyday local, seeing the coast of Galveston from a Pedego is an experience second to none. What are you waiting for? It’s time to gather your loved ones and head to Pedego Galveston because the perfect day awaits!

Pedego Galveston offers a full range of e-bikes for rental or purchase to ensure that you find the perfect fit for the day ahead of you. From Interceptors, to Comfort Cruisers, to even Pedego’s speciality models, Pedego Galveston has a plethora of choices. Don’t get too overwhelmed though, because this will be the only tough decision of the day!

With a Pedego bike, you are sure to have a great time, no matter what your fitness level or age is. Pedego allows you to get in a hard workout if you desire, or just sit back and enjoy the ride, and once you are ready to hop on your bike and get going, it’s time to start exploring down the Seawall.

Your first stop is going to be at Hotel Galvez, located across the street from the Seawall. It is one of the most historic hotels in Galveston, and is rumored to be haunted– if only the walls could talk! Built in 1911 for the then extravagant cost of $1 million, the Galvez Hotel has been intertwined in the island’s history for generations. In 1994 it was added to the list of Historic Hotels of America and is still known today as an elegant, vibrant destination for travelers all around the world. Both the hotel and city of Galveston are named after the American Revolutionary War hero, Bernardo de Galvez. Needless to say, history is oozing from the walls of the Hotel Galvez so feel free to walk around the grounds and explore after locking up your Pedego. Once you have finished taking it all it has to offer, it’s time to hop back on your bikes and head to the next destination!

Just a hop, skip, and a jump away from the Hotel Galvez is the Balinese Room Pier. The Balinese Room was a famous nightclub that was built on a pier stretching 600-feet from the Seawall over the waters of the Gulf of Mexico. It opened in 1929 and for decades it featured a dance hall and illegal casino for tourists and residents alike. Many famous faces made their appearance at the Balinese Room, such as Frank Sinatra, Bob Hope, George Burns, and The Marx Brothers. Sadly, in the morning hours of September 13, 2008 the structure was completely destroyed by Hurricane Ike.

Since Galveston is an island off of the Gulf Coast, it has fallen victim to multiple hurricanes and tropical storms over the years. However, it wasn’t until September 8, 1900 when a disastrous hurricane struck, that the need for a seawall was deemed necessary. At this point, it was the greatest natural disaster in U.S. history, taking 6,000 lives and causing $30 million dollars worth of damage. It was then determined that Galveston would need some sort of protection against these unpredictable disasters in the future, causing the seawall to begin construction. It was initially built 17 feet high (at low tide) and three miles long; yet over the years, the seawall has experienced lengthening additions to provide further protection. Additionally, from 1903-1911 the city of Galveston undertook extensive grade raising which not only provided support to the seawall, but also facilitated drainage and sewage systems making it one of the most brilliant feats of civil engineering in the history of the nation. After you witness this incredible structure, get ready for the fun to continue because your next stop is nothing short of a good time!

The Galveston Island Historic Pleasure Pier is your one stop destination for fun! Featuring waterfront entertainment like no other Gulf Coast destination, it is host to various family-oriented attractions including rides, midway games, a wide selection of food venues, and retail shops. The Pleasure Pier opened in the summer of 2012 and has something for everyone! You can lock up your Pedego and explore everything it has to offer before heading to your next stop. If you are interested in getting on some rides, all-day tickets are available for purchase so you can stop at the Pleasure Pier on your way to the end of the Seawall and back to enjoy some fun. Get your cameras ready for this stop, because it is picture worthy to say the least! The Turtle Mural at Menard Park is designed to raise awareness about the Flower Gardens Banks National Marine Sanctuary and sea turtles, which was made possible with support of the National Marine Sanctuary Foundation. It now stands tall as a public art piece to educate tens of thousands of residents and visitors about sea turtles and the sanctuary. Snap a few photos or selfies in front of the Turtle Mural and share with your friends, as you might create a chain reaction and educate someone else about the efforts to save the sea turtles.

Have you already worked up an appetite? No problem! Gaido’s Seafood Restaurant is the perfect place to stop for a bite to eat along the Seawall. Not only does Gaido’s serve delicious seafood, but it also offers a rich history as it first opened their doors to the beach-going public in 1911. San Giacinto Gaido started the restaurant with the intention of being the freshest fish house on the Gulf, and the restaurant has maintained that same reputation today– over a 100 years later. Gaido’s remains passionate about their food with their main focus on taste and serving up delicious meals to regulars and visitors alike. Before you continue your trip down the Seawall, be sure to grab a refreshment and a tasty meal at Gaido’s– you won’t regret it!

The Fort Crockett Park was built in 2012 and funded by the snack company, Frito Lay, for one million dollars. It is located in the Hampton Battery area along the Seawall, and offers planters, benches, picnic tables, and special plaques that tell the native story of the Seawall. Fort Crockett Park reaches from 45th to 51st Street, ending at what is known as the Izard Battery. These battery areas, which jut outwards toward the surf, are part of the original military installations at Fort Crockett. Don’t hesitate to lay out a blanket on the sand or relax on a park bench and take in the gorgeous seaside views before continuing on to your next stop.

At the far end of the park is Fort Crockett itself, which was originally built in an effort of defense to protect the city, harbor, and bay entrance of Galveston. Fort Crockett was initially in charge of protecting the commercial and industrial ports of both Galveston and Houston, as well as the extensive oil refineries in the bay area. What was once a military facility, is now managed by the US National Marine Fisheries Service, and hosts the Bureau of Commercial Fisheries Laboratory, the Texas Institute of Oceanography, as well as some university facilities. The area still contains several historical buildings and military fortifications. If you are up for one more stop before heading back, you will be at the West End of the Seawall as you exit the San Luis Resort. Be careful because the sidewalk ends here and drops off, but it is the perfect spot to lock up your Pedego and watch the sunset, since you will be looking due west. Lay out a blanket or grab a lawn chair to gaze upon the gorgeous view, as this is truly the best way to complete your epic day of fun!

The Best Pedego Bike For Your Ride

The best bike for your ride down the coast is the one you feel most comfortable on, but if you wanted our opinion we would recommend the Pedego Comfort Cruiser.

The Comfort Cruiser is the original Pedego electric bike, which has been known to turn heads and guarantee a smile while riding one. The Comfort Cruiser will not only provide an enjoyable ride but will offer a comfortable one as well– making this 18 mile round trip a piece of cake. During your ride, you can use the pedal assist settings on the Comfort Cruiser to get some exercise, or sit back and enjoy the ride by using the throttle, or even use a mixture of both!

If you are unsure about which model might be best for you, the friendly faces at Pedego Galveston are more than happy to assist you. To check out the wide range of Pedego electric bikes available, check them out here. The Gulf Coast of Texas is calling and the only thing left to do is to plan your tour along the Galveston Seawall — so check your calendar because the perfect day awaits!

To schedule your rental or answer any questions, feel free to contact Pedego Galveston at [email protected] or call (409)-220-3588.