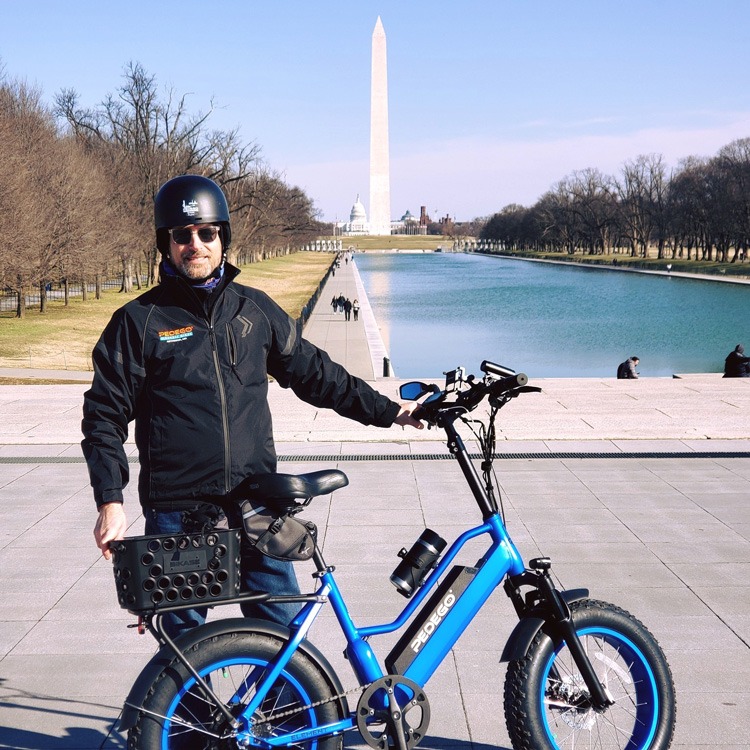 Looking for the perfect way to spend your day? Take a Pedego to explore our nation’s capital! Pedego Bethesda’s 3 to 4 hour guided tour includes all major monuments and sites along the National Mall. Riding a Pedego lets you cover an incredible amount of ground and great sightseeing opportunities to see the Mall from one end to the other without dealing with crowded or closed metro stations, traffic, or parking. Experience Washington D.C. to the fullest on an e-bike! Tours begin in late March/early April through October/November, depending on weather conditions. Pedego Bethesda can also tailor this tour for private groups, if desired.

To start your fun day ahead, you must first stop at Pedego Bethesda to pick out your bike for the ride around Washington D.C and the National Mall. Whether you are renting a Pedego for the first time or deciding to purchase, the friendly faces at Pedego Bethesda are more than happy to assist you in finding the perfect model for you.

With a Pedego bike, fun is guaranteed so you are sure to have a great time no matter what your age or fitness level is. A Pedego allows you to get in a hard workout if you desire, or just sit back and enjoy the ride, and once you’re ready to hop on your bike and get going, the first destination is only a short distance away.

To begin your journey to Washington D.C. and the National Mall, make your way to the Capital Crescent Trail. The Capital Crescent Trail is a 7-mile, shared use rail trail that runs from Bethesda, Maryland to Georgetown in Washington D.C. This beautiful trail is tree-lined and covered in greenery making for a gorgeous ride to the nation’s Capital. Whether you plan to ride the trail during the week or on the weekends, it is guaranteed to be occupied by fellow cyclists and pedestrians. Along the way, you will ride next to the historic Potomac River which offers lovely views so be sure to pull your Pedego over and snap a few photos.

The first monument on this historic tour is the Lincoln Memorial, which is a commemorative statue of Abraham Lincoln that stands 19-feet tall and is located at the far western end of the National Mall in D.C. In addition to the Lincoln statue itself, the interior of the memorial features various murals and inscriptions of the revered President’s most important speeches such as the Gettysburg Address and his second inaugural address. The Lincoln Memorial has been named a “must-see” for every visitor to the nation’s capital by washington.org and towers over the Reflecting Pool at the western end of the National Mall.

It is located in East Potomac Park on the south bank of the Tidal Basin. In 1934 it was authorized for construction as part of a beautification program for the nation’s capital and although it was opposed by various people due to their worry of destruction to the cherry trees, the Classical design it boasts, and the fear that the monument would ruin the spectacular vista of the Potomac River, it eventually began construction in 1938 with the backing of President Franklin Roosevelt’s support. After the completion of the memorial, it was dedicated on April 13, 1934, which was the 200th anniversary of Jefferson’s birth.

At the eastern end of the National Mall is the U.S. Capitol Building. The U.S. Capitol is the meeting place where both the Senate and House of Representatives come together to discuss, debate, and deliberate national policy, develop consensus, and craft the laws of the country. This building is one of the most symbolically important buildings in the world and has been deemed one of the most architecturally impressive. The Capitol is also a museum of American art and history, so if you have time to spare, feel free to lock up your Pedegos and take a look inside to witness the history of our nation.

This incredibly famous and historic building may not need an introduction, but on your tour through Washington D.C. the White House is an absolute must-see. Commonly known as the residence of every U.S. president, the large white is a symbol of American history and democracy. Each president of the United States has lived there, ever since 1800 when John Adams was in office. According to the White House itself, it is not only a place where the President and First Family of the U.S. live and work– but can also be considered the ‘People’s House’, where the hope is that all Americans feel a sense of inclusion and belonging.

The Washington Monument was built to honor George Washington, the first president of the United States and the commander-in-chief of the Continental Army. It was once the tallest building in the world, standing just over 555 feet. After undergoing years of renovations, the Washington Monument reopened in 2019 and improved with a state-of-the-art elevator that can move hundreds of visitors up to the observation deck daily. Venture up to the top, if you dare, as you are guaranteed to see one of the most breathtaking, bird’s eye views of Washington D.C. From the observation deck, you can see nearly 25 miles in each direction, and you may even spot some of the previous stops on the tour. This is definitely a stop you will want to take some time at, so feel free to lock up your bikes and take a ride 50 stories up– you will truly get to experience everything D.C. has to offer.

The final stop on the tour before heading back to Pedego Bethesda is the Vietnam Memorial. The Vietnam Memorial pays tribute to the brave members of the U.S. Armed Forces who fought in the Vietnam War and were either killed or missing in action. The memorial is separated into three different parts: The Three Soldiers statue, the Vietnam Women’s Memorial, and the Vietnam Veterans Memorial Wall, also known as The Wall That Heals– which is recognized as the most popular feature. The memorial is open 24 hours a day, but if you visit it between 9:30 AM and 10 PM, then there will be a ranger on duty to answer any questions you may have. Feel free to take a moment and pay your respects before departing on your journey back to Bethesda.

The Perfect Pedego for Your Ride

Pedego Bethesda offers a few different bike options for rental, but our recommendation for this ride is one of our Interceptors. The Pedego Interceptor is America’s best selling electric bike, as it combines beach cruiser comfort and style with breathtaking performance and user-friendly features. It will allow you to ride with ease through D.C., and if it feels like it was made just for you– that’s because it was!

The Interceptor is offered in two different models, Classic and Step-Thru. The Step-Thru model provides a comfortable and easy way for you to step through to the other side of your bike; whereas, the Classic frame is built higher and requires you to swing your leg over the seat to get on. Regardless of which model you choose– comfort is something that won’t be compromised.

Once you decide on which Interceptor model you prefer, it’s time to get on and ride! You can get a good workout by altering your Pedal Assist settings or use the throttle and cruise along if you are interested in a more laid back ride.

Unsure about which Pedego model would be best for you? The friendly faces at Pedego Bethesda are more than happy to assist you with any questions you may have. To see the complete range of Pedego electric bikes available, check them out here.

What are you waiting for? There is no time to waste, because Washington D.C. is calling your name! To schedule your rental or answer any questions, feel free to contact Pedego Bethesda at [email protected] or call (240)-800-3154.